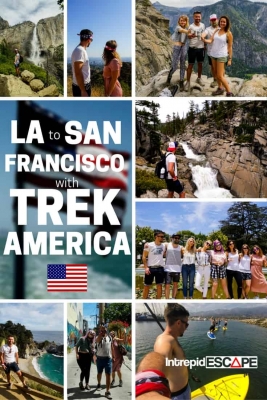 Five years ago, I took off with a round the world ticket, it finished in the USA. It was the best thing I ever did in my life, and shaped my future in travel. But there’s always been one part of that itinerary missing, a part I had to skip. I found out the hard way that Australia and New Zealand would eat in to my funds like nothing else. So I had to miss the Californian coast, and the road trip from LA to San Francisco.

Fast forward to a few weeks ago, and my opportunity came around again, with Trek America. And it was exactly the same route, same stops, and length of time. It’s like they knew my plans exactly. So below you’ll find what we did, step by step, with photos that will make you want to call Trek America today and book the same trip (if you do, let me know!!).

The group met for the first time in Los Angeles. It’s like your first day at school, a couple of the group had met before, but most of us were completely new to each other. With group travel, it’s a nervous time, will we all get along? Will they like me? You soon get over it, and a couple of beers help! After a welcome meal on the first night we started with Venice Beach. It’s touristy yes, but people watching here is brilliant! You can’t really avoid touristy in LA, especially if you’re short on time. Next we took a short hike for a view of the Hollywood sign, and impressive views over LA. 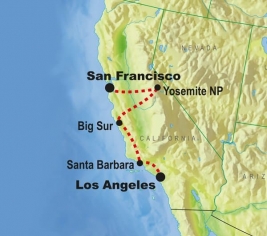 Then came Beverley Hills and a walk down Rodeo Drive; famous for a Julia Roberts film, or something? J And finally into Hollywood, where we took part in a Food and drink bar tour, which was great, it gave us an insight to some of the local history behind the bars and their traditions. I appreciate the above sounds like a check list, which isn’t ideal. But these places are touristy but you need to see them, if I had longer I’d love to scratch beneath the surface and discover the real LA. Next time LA, next time. 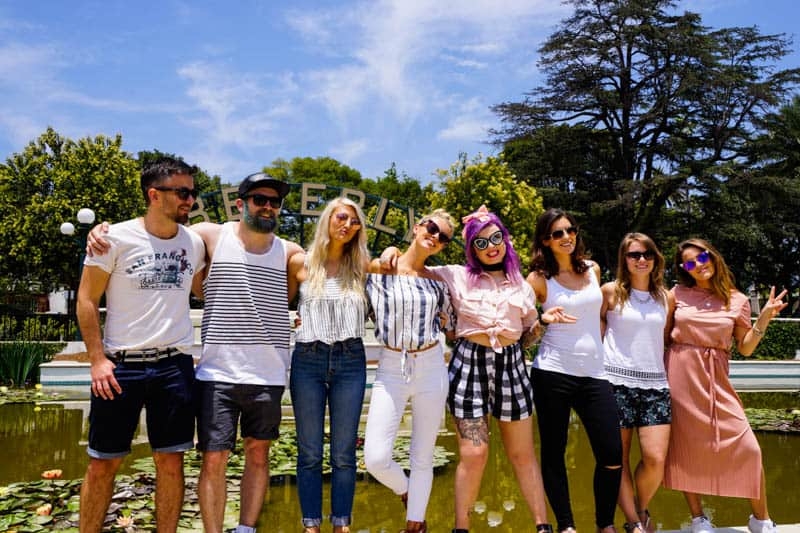 The next day our awesome Trek America guide Darin had us up early to pack the minivan for a two hour drive up to Santa Barbara. Santa Barbara is a Mediterranean style city on the coast, with many from LA using it as a break from the hectic LA lifestyle. We were here to Stand Up Paddle-board, and the sun came out perfectly for us. After a safety briefing from Santa Barbara Adventure Company we were ready to go. As soon as we were in the water we were greeted by a seal just a few feet away, with sea lions on the pier! We hadn’t even left the bay. If you want to see nature close up, then you have to do it on the water, like this or in a kayak. I wasn’t expecting to like Santa Barbara so much, and there’s a ton of other things to do here, look out for the Grey Whale watching, between February and May you can catch their annual migration. 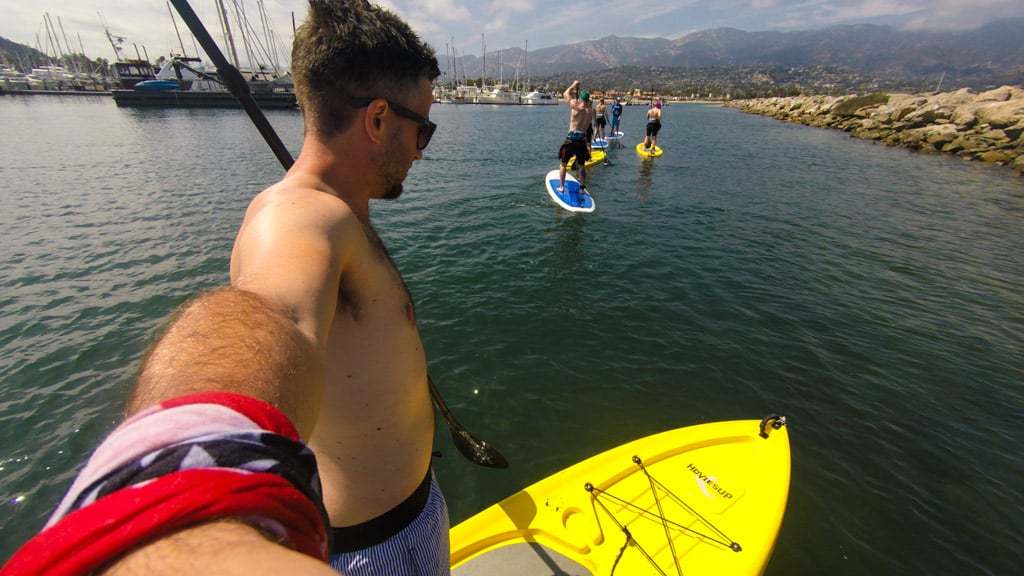 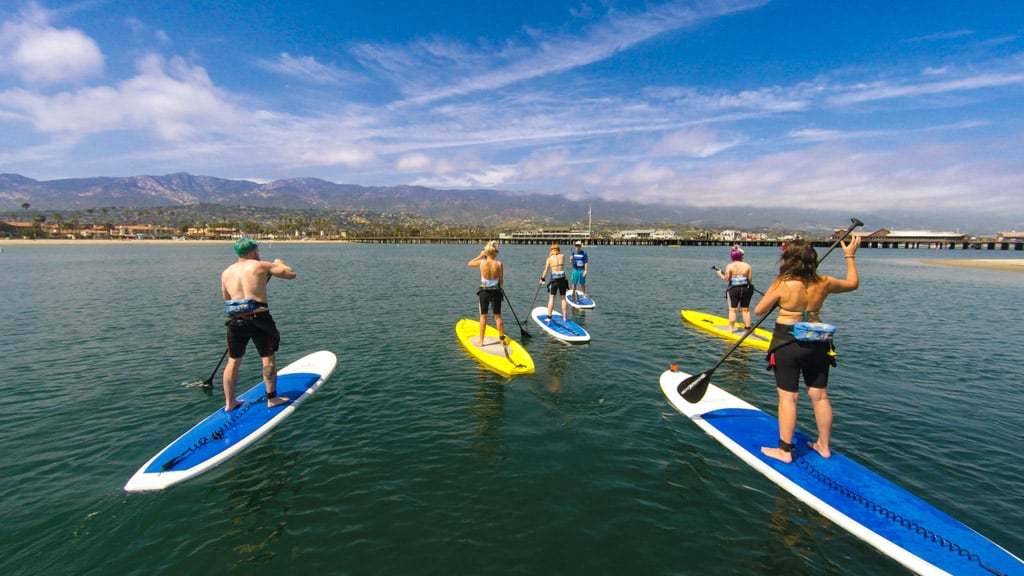 So what is the Big Sur? I wasn’t really sure if it was a drive, a town or a National Park. It’s kind of all three, but more of a region of natural beauty. There’s a lot of driving, but it’s scenic, so make sure you get a turn riding Shotgun! And that’s the beauty of a good group is passing the time, chatting, listening to music (my 90s playlist always goes down well!), making stupid Snapchat videos. Our first stop was a short hike, to see the Giant Sequoya trees, which have been standing for over 3000 years! Impressive, to say the least. A little further and we check out an Elephant Seal rookery, a protected area for Elephant Seals to rest, bath and mate. There were hundreds! Finally we stopped at one of the most scenic, stunning walks I’ve done in my life, the McWay Falls. Words can’t do it justice, so just take a look at the photos. We were then left with another drive to our campsite, where we were once again proved by Darin that you can have a great dinner on a camp site. 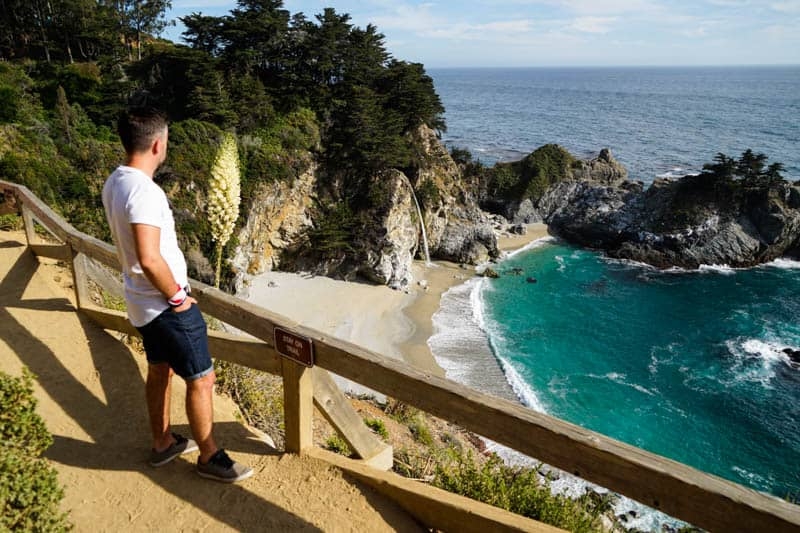 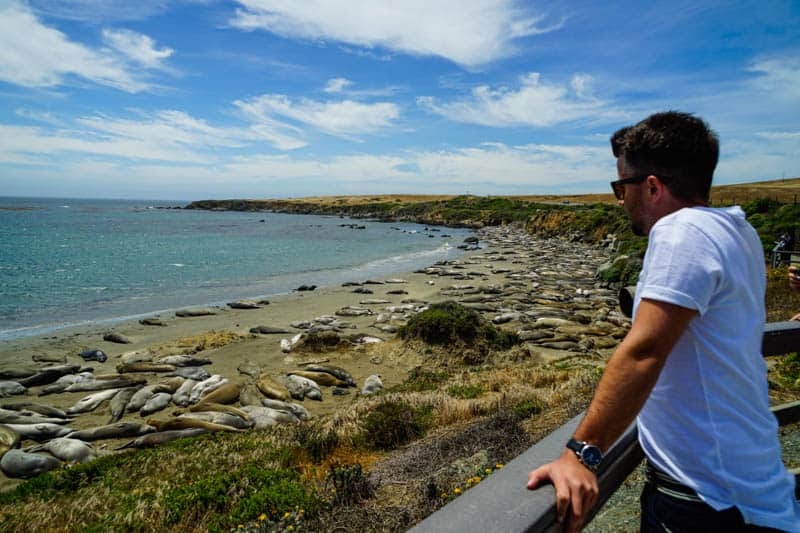 Waking up on my first morning at Yosemite, I’d slept terribly and I was cold all night. I even had trippy dreams where I thought my tent was floating away down a river (it felt real OK?!). However none of this mattered come 6am, the buzz of waking up at Yosemite National Park gave me energy.

“I woke up today with this feeling, that better things were coming my way…”

Keep on Movin’ Highlights from Snapchat

There are enough hikes or walks here to keep you entertained for a week, but we just had one full day. The group was split with priorities, 4 of us wanted to take on the biggest one day hike, the Upper Yosemite Falls, whilst the others would check out a couple of closer waterfalls. It was a great decision, I’ll be writing a full article on this soon, so let’s just say it was hard, but the views were spectacular. Making it to the top was a big achievement for all of us, and we grew a little bit closer on that walk. Well we did have 6 hours of chatting about rubbish and telling stories! 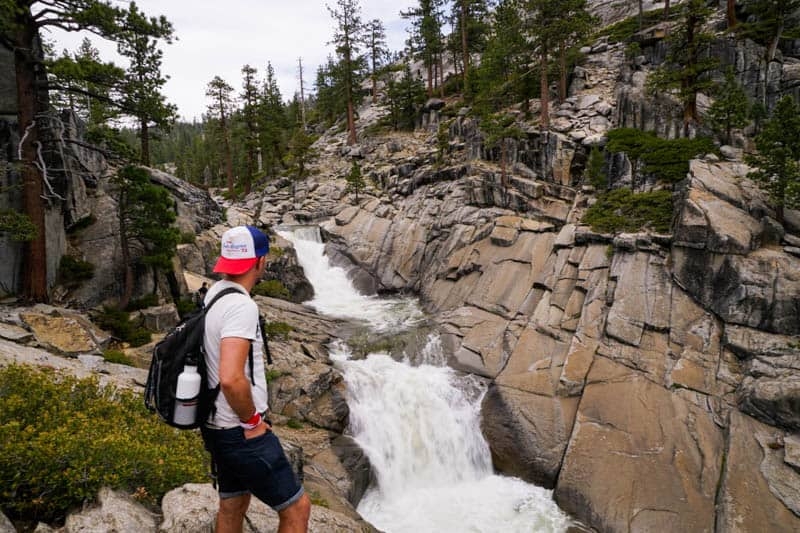 Our final stop, San Francisco. A city that’s been about as high on my list as any. I wasn’t disappointed; I always maintain that I make my mind up on a city instantaneously, depending on the feel or vibe I get. OK sometimes I’m wrong, but not often. It’s a city divided into districts, and first we checked out the Mission District and the impressive street art. It gave me a chance to learn how to pose for a photo from the Fashion Bloggers. Well I’ll let you judge, I guess I’m not as natural as I thought.

You can’t really visit San Fran without a trip to Alcatraz. The Rock was interesting; you can take a guided tour learning about the infamous inmates and their attempts to escape. But if I’m honest I just wanted to pretend to be Sean Connery and practise my almost perfect Scottish accent; “Welcome to the Rock!”. The group then had a chance to do their own thing, and I chose wander to the Coit Tower and check out the bendiest street in the world (or something). The latter was pretty pointless and touristy, but the Coit Tower, that was amazing. You get 360 views over the whole of the city, including the Golden Gate Bridge and Alcatraz. I could have stayed up there for hours, I really recommend doing this and at just $8 it’s a bargain. 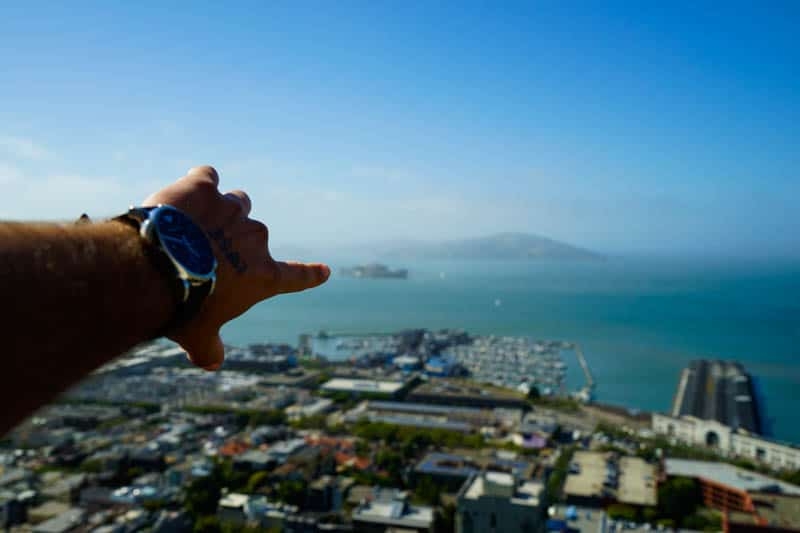 Our final planned activity was a boat cruise around the harbour, and under the Golden Gate Bridge. It was a pretty fitting way to end the trip, and literally a photographers dream. Make sure you tick these off the check list: 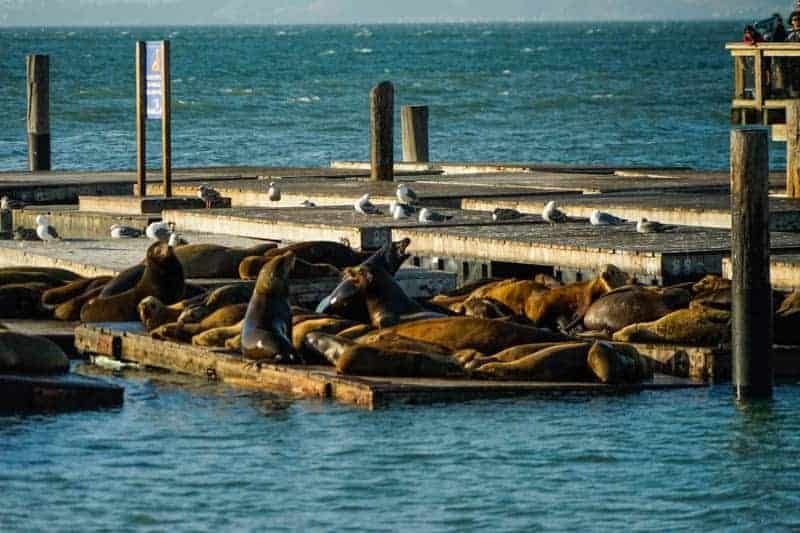 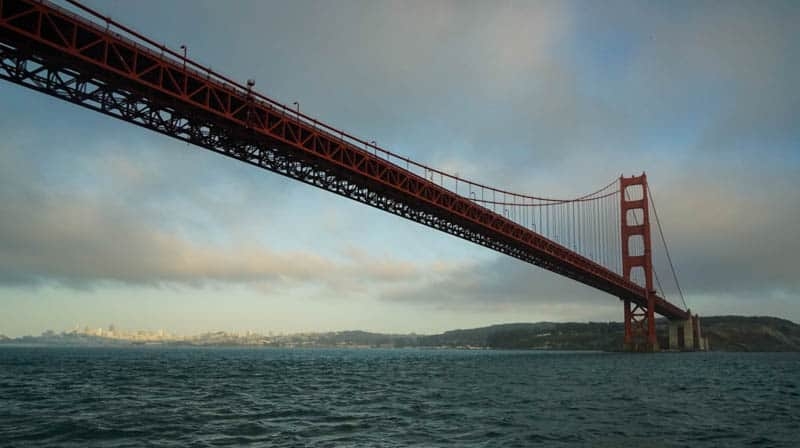 I had a chance to pap some of the group too, and literally show how close people got by the end of the trip. And that’s group travel, I haven’t been on a single group trek or tour without making good friends. Unfortunately in the travel world it’s always hard to cross paths again, and whether you do or don’t, that doesn’t matter. It’s the fact that you shared good memories with awesome people, and that as I’ve found is what Trek America is all about.

I took part in California Calling as a guest of Trek America and Visit California, to take part in their #iTrekHere campaign. The trip was complimentary, however all of the content, opinions and photography are my own, and I have not been paid for this article. Please take time to visit the Trek America website to support me on more adventures like this one!

The Official Video, by Travizeo 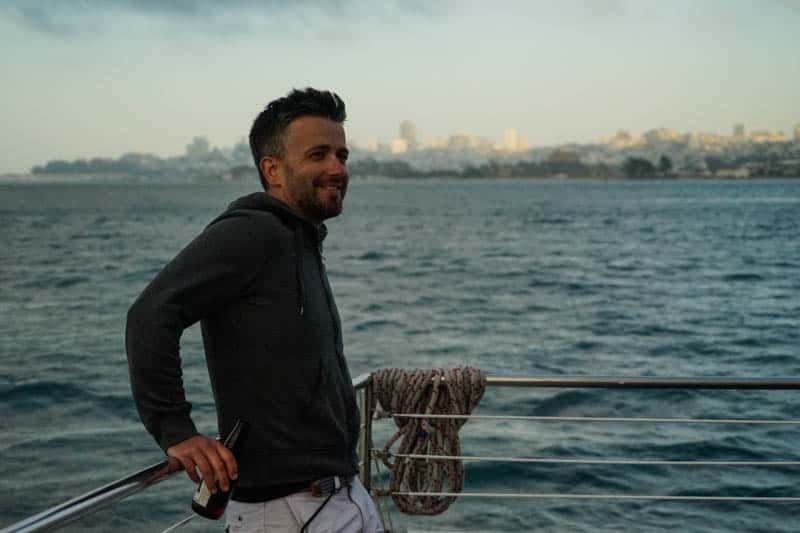 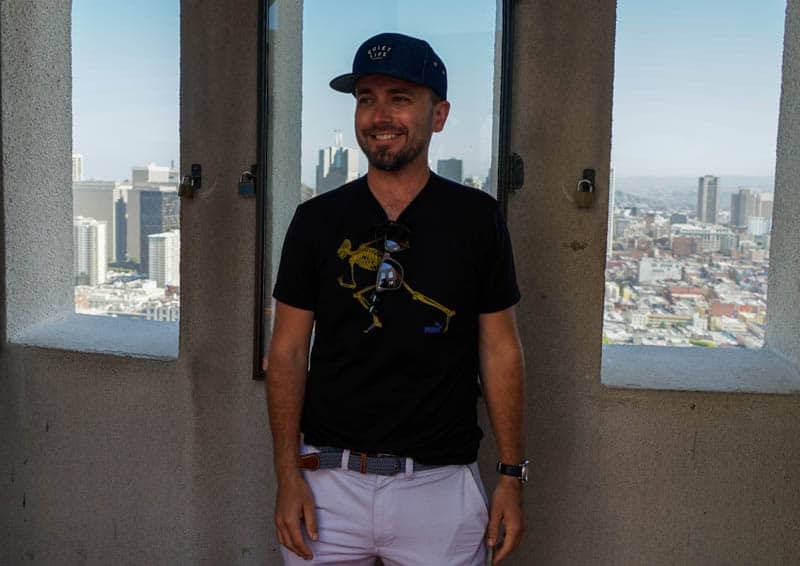 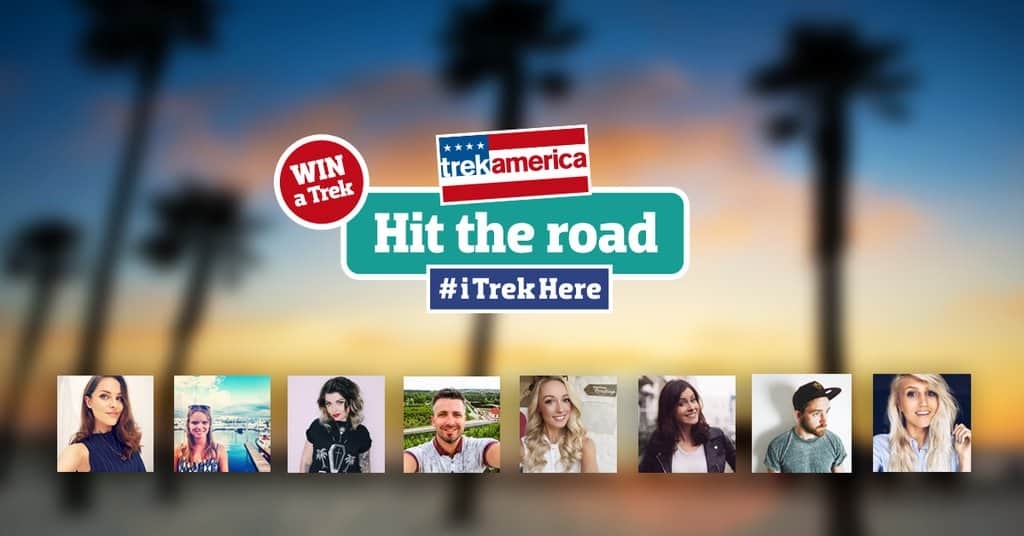