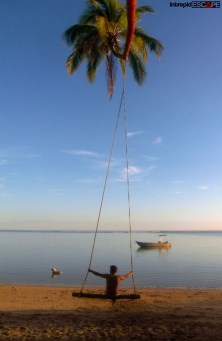 It was a Sunday morning and I woke in backpackers paradise, there’s no other way to describe Fiji Beachouse, I checked in for three nights and stayed for three weeks. That doesn’t happen often. You don’t lay in bed for long here, it was a gorgeous sunny day, blue skies and a fresh cool wind breezed in from the ocean. Scuba Diving with Sharks wasn’t really on my agenda.

At breakfast a Canadian girl casually said ‘do you fancy going shark diving today?’. I’d heard about watching Reef Sharks as they’re feed above you, I’d seen a few Reef Sharks snorkelling and the thought of scuba diving with them didn’t really phase me, as they generally cause no harm to people. So I accepted and gave her some money, it sounded like a great trip. We got the mini bus later that day, had the briefing and were told about the two dive sites we’d be heading to.

[dropcap]M[/dropcap]y only concern at this point was the depth of the dive, at 25 metres it was deeper than I’d ever been with my 18 metre Open Water license, the Fijian Divemasters didn’t seem too concerned, things are done a little differently here. It had been a while since my last dive so the feeling whilst heading out to the deep blue ocean, in a new country, was incredible. The excitement and adrenaline was beyond measure.

The groups were buddy’d up but as we descended I quickly realised I needed more weight on my belt. It left me buddy-less and a little panicked as I tried to catch the group as they descended down a rope fixed to a buoy. My main aim was to catch my breath and not get flustered, I’m not the most experienced diver so I know one of the worst things you can do is panic. At the bottom the group was lined up with their back to the coral, there was nothing but a mass of fish in front of us, no sharks yet. I saw my buddy was ok so lined myself up next to the group, I was last and right on the edge, so not protected by the coral like everyone else. It was at that point that I had a serious sense of fear, I can’t really explain it, but I was about to have one of the most terrifying encounters of my life.

Face to face with a Bull Shark

[dropcap]I[/dropcap] can’t explain the sense, but I just knew something was stalking me over my left shoulder, I looked around and saw a colossal Bull Shark, yes, a Bull Shark! Colossal is an understatement. This experience was nothing to do with Reef Sharks. For what felt like 5 minutes, the shark stared at me, then and there I had a moment with nature, frozen in time I was absolutely petrified. I reached behind me to grab the arm of the person next to me, still locked in a gaze with the shark, and at that moment it swiftly swam past, I could feel the force of the water from the sharks fin. I saw pure fear in the eyes of the guy next to me, and I screamed “f*** me” into my regulator! He shuffled along to give me more protection from the reef, that encounter was not what I was expecting.

“I had a moment with nature, frozen in time I was absolutely petrified”

As I composed myself, I started to take in what was happening in front of me. There were huge dustbins full of food, mostly dead fish and fish heads. The guides were feeding the Bull Sharks straight from their hands, just a few feet in front of us. A couple of us hired an underwater camera which we gave to the guide, hence the extreme footage in the video above (I highly recommend doing this). Whilst there is an element of routine to the feeding, Sharks are still nature’s oldest predator and nothing is predictable, that’s what makes it so terrifying. The guides have protective clothing and a stick, but that’s all. They are more exposed than us, and to some extent are there to protect us. But I’d hate to think what would happen if things went wrong, and I wonder if it ever will.

[dropcap]T[/dropcap]he mighty Bull Shark can grow up to 13 feet in length, and up to 1200 pounds. Of all sharks they are the 3rd biggest killers of humans, although most deaths are from blood loss after a shark has confused a person for a more common prey. During the dive I took a moment to appreciate how majestic and gracious the Bull Shark really is. Every movement is calculated, the way it assesses the food before taking it, eyeing up the potential for danger. It’s an incredible animal. So had I known all of this before the dive, would I have agreed to it? The answer is an astounding YES, but I would have called loved ones prior to the dive, you know, just in case.

If you enjoyed this post please share it with your family and friends. Have you ever been Shark Diving? Were you as terrified as me? I’d love to hear your thoughts in the comments below

Fiji Beachouse on the Coral Coast. A backpackers paradise, I’ll be writing a full post on it soon. For now, just make sure you if you head to Fiji, you make it to Fiji Beachouse.