The Netflix series Narcos opens with the quote “Magical realism is defined as what happens when a highly detailed, realistic setting is invaded by something too strange to believe.’’

Just outside Winchester, Hampshire is a natural amphitheatre, known locally as the devil’s punchbowl. It’s a quintessential piece of tranquil English countryside; rolling green hills with scattered woodland. It’s all very nice and sedate, where the only sign of excitement comes from the occasional dog walker or grazing sheep.

Then once a year it’s invaded by An Audio-visual joyride, as I called it in 2015.

Boomtown has appeared in the devil’s punchbowl since 2011, and every year it lives up to its reputation as something unique in the UK festival scene. Because Boomtown is not just a music festival; it’s an immersive experience into a vast fantasy world, strung out over the valleys and hills. Every year brings with it a fictional chapter in a continuous storyline, be it alien invasions, corporate dictatorships or even a revolution.

Boomtown is not just a music festival; it’s an immersive experience into a vast fantasy world 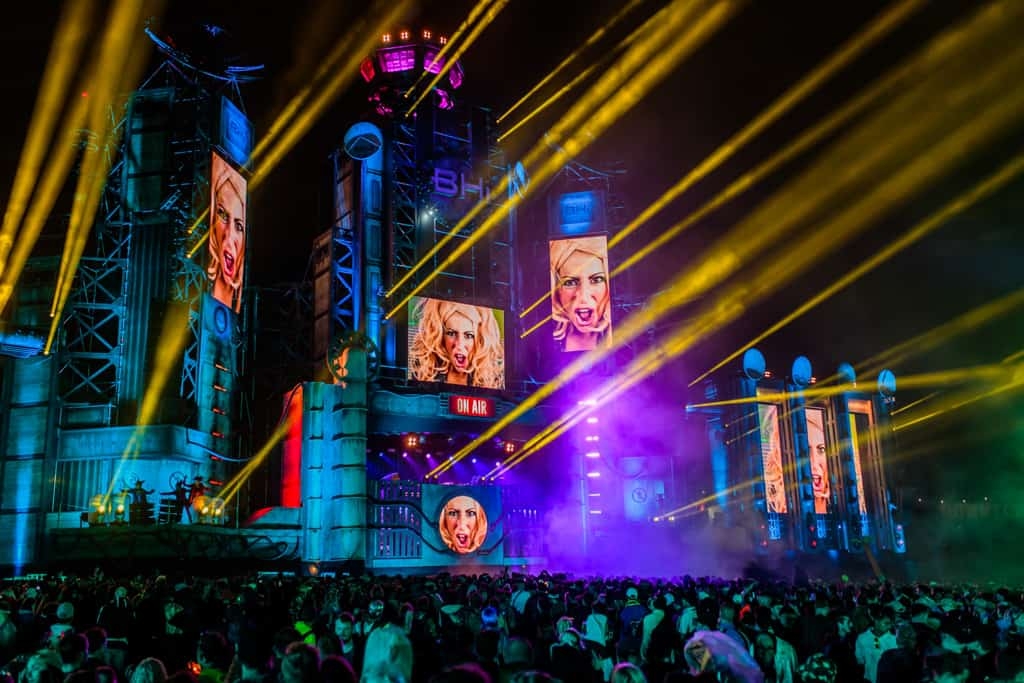 When you arrive you gradually start to realise that Boomtown is big. Really big. Seeing it all is impossible, so it’s best to act like a good tourist and wonder without too detailed a plan. It’s the one festival you don’t want to have an agenda, or a list of bands to see. Just go with the flow, you won’t regret it.

The architecture and attention to detail is incredible. This is old school film sets before the days of green screen. Gradually you start to understand the layout of the city and its various districts. At its heart lies the town centre, where an eclectic mix of bands play including folk, punk and hip-hop. Limp Bizkit played here at a surprisingly intimate gig. From here, you start to drift into the city’s other districts, all with a unique vibe and character.

Head to the Old Town and you find a dense warren of narrow alleyways and crumbling facades, where folk punk blares out from taverns and backstreet bars. Circus performers end up here, hanging upside down out of windows or attempting a tightrope walk.

Then you drift on to some of the other 14 districts. Paradise Heights, a lavish area where funk and soul drift across the sofa beds and casino tables. District 5, a gritty industrial zone of drum and base, house and jungle.  Sector 6, an even grittier district with jungle and grime. If Jazz and reggae is more your thing, Whistlers Green provides a more sedate atmosphere, providing saunas, hot tubs and all manner of mind and soul care. 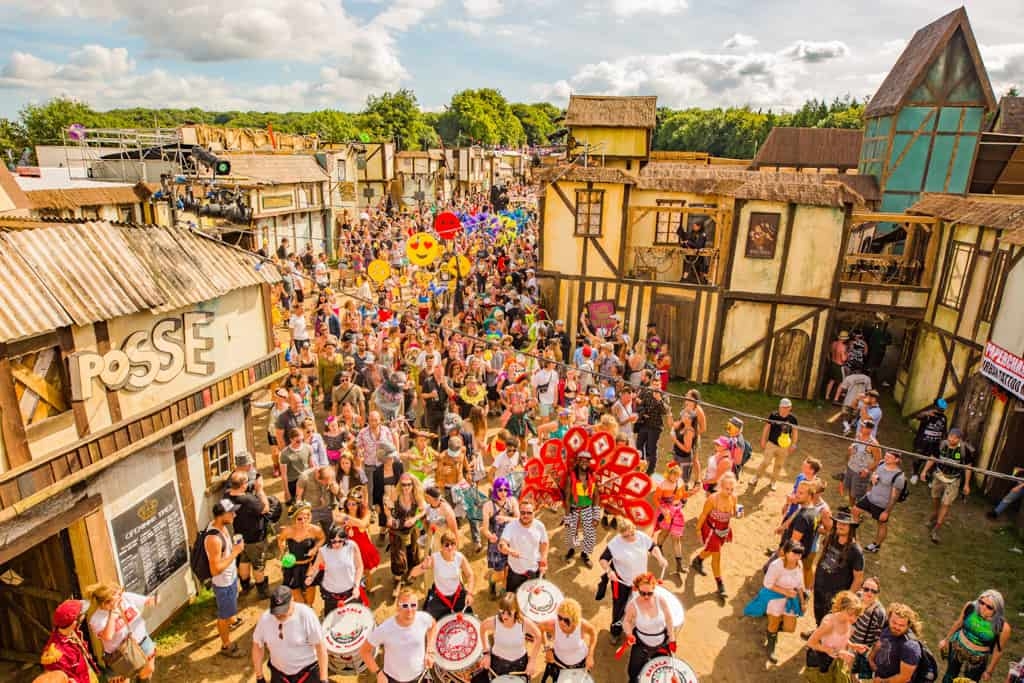 And for fans of psychedelic trance, head to one of the woodland parties scattered all about the site, saturated in liquid colour light displays. And what city would be complete without a Chinatown?

But perhaps the greatest landmark at Boomtown is Lion’s Den. Built at the foot of a valley and complete with waterfalls, it looks like some kind of Aztec temple, still functioning after centuries of use. Damon Albarn and his fantastic creation the Gorillaz chose it for their only UK festival this year. It was a fitting venue for the impressive animations and showcase of hot new talent.

For all its impressive theatre and creativity, Boomtown does not neglect its line-up or its organisation, with its 25 main stages and 80 smaller venues. Since its inception as a small 1000-strong music festival back in 2009, its grown to 60,000 people in 2018, its 10th Chapter. But it remains an independent festival, helping to give it its unique character. Boomtown is genuinely something special, with a vibrant and unpretentious atmosphere. 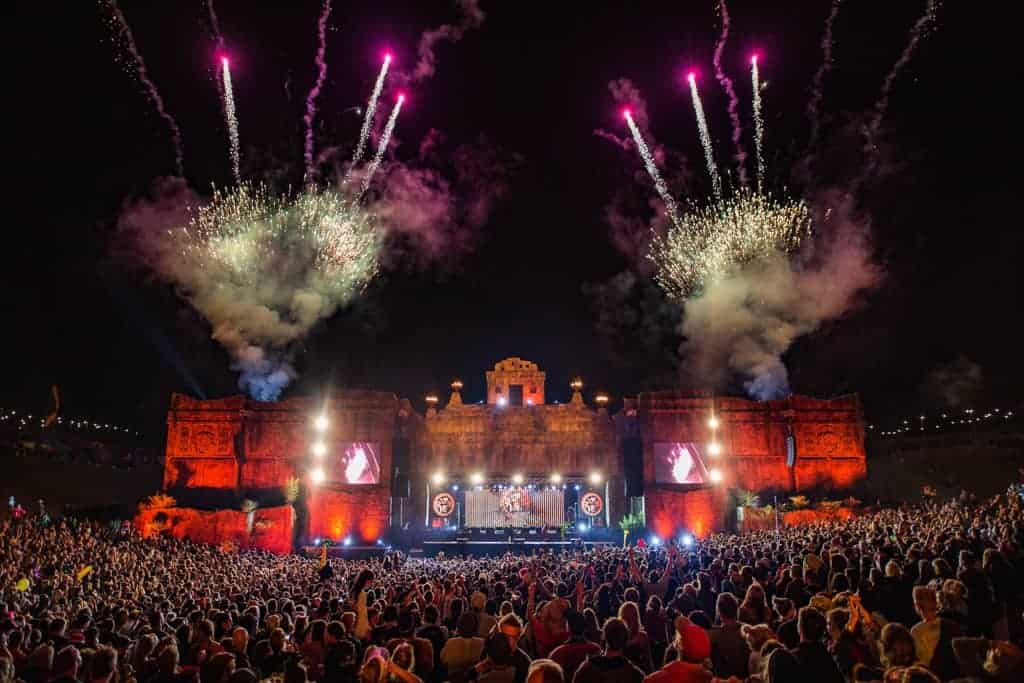 Given the scale of Boomtown and its location its inevitable issues of sustainability have been raised in recent years. This year the organisers have signed the Drastic on Plastic Pledge as part of a commitment to eliminate single use plastic by 2021. As part of this pledge, they have banned plastic straws and plastic serveware on all trader stands,

Boomtown is also participating in the Greener Festival Award for the first time this year, which will independently assess its sustainability performance. A shuttle bus runs between the site and Winchester Railway Station, coaches collect from over 50 destinations and this year an organised cycle tour to Boomtown was organised.

For 2019, they are banning ALL single-use plastic, and plan to plant a tree for every person on site. Effectively creating a rain-forest. It’s a festival that appreciates its surroundings. If it didn’t the farmers on the South Downs Way would kindly ask them not to come back.

There is the equivalent to 8750 plastic straws in one tent. Most major music festivals leave behind 20,000 tents

Each year there’s a mass clean-up operation and they always protect the wildlife. This year they’re looking to solve every festival’s biggest problem; tents. There is the equivalent to 8750 plastic straws in one tent, and none of it can be recycled. Most major music festivals leave behind 20,000 tents. Just let that sink it, and if you’re a festival goer that’s left behind yours. Shame on you. Don’t add to this statistic for 2019.

There’s far more information about Boomtown and sustainability in the video “What it takes to make a world”, below.

Like any festival, days and memories start to blur together, and it all starts to become very real and very believable. The outside world fades into the background, and the dream world of Boomtown becomes very real. And then, as quickly as it arrives, it fades away back into the hills. Something too strange to believe.