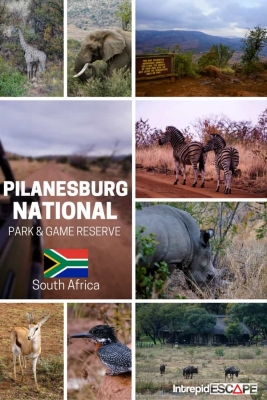 Recently I visited South Africa for the first time; this amazing trip was centred around Johannesburg. It was a jam packed itinerary, which saw me discover Soweto, take a tour of the city, Bungee from the Orlando Towers, and then spend a couple of unforgettable days in Pilanesburg National Park.

Pilanesburg National Park and Game Reserve is located in the North West Province of South Africa, to the west of Pretoria. It’s a 2-3 hour drive from Johannesburg making it a great alternative to Kruger National Park. The 572 square kilometres of park hosts an array of wildlife, including the “Big Five” – the 5 most difficult mammals to hunt, and also among the most dangerous game animals in Africa. This list includes the Lion, Elephant, Buffalo, Rhino and the Leopard. But it’s not all about the Big 5, there are approximately 10,000 mammals here, so take a look at my Wildlife checklist below, and see how many you can tick off. 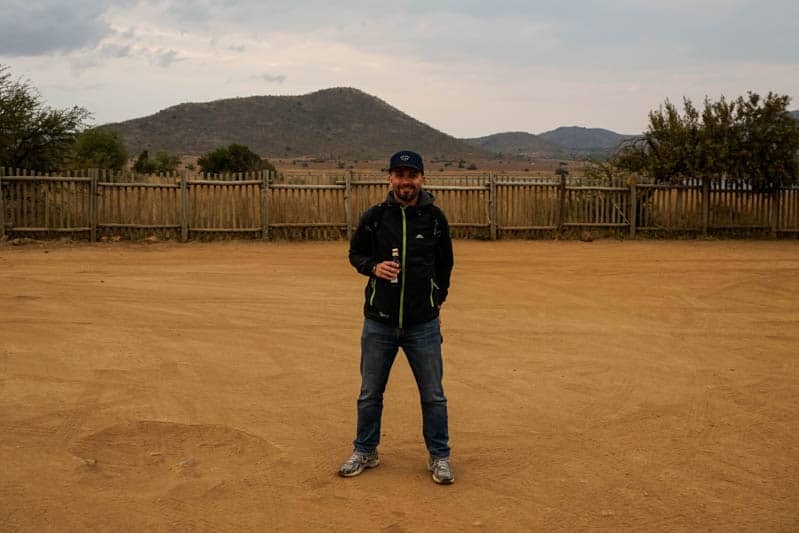 Within Pilanesburg, there are a number of accommodation options to suit your budget; admittedly my hotel was towards the top end of the market, at the Bakubung Bush Lodge. It was a perfect base to explore, and I could not believe that my room backed onto the park itself. On the day I arrived I could see Buffalo and Warthogs from my bed! You’ll get one game drive included with your stay, and the option to add more, and if you’re brave enough you can have a guided bush walk. 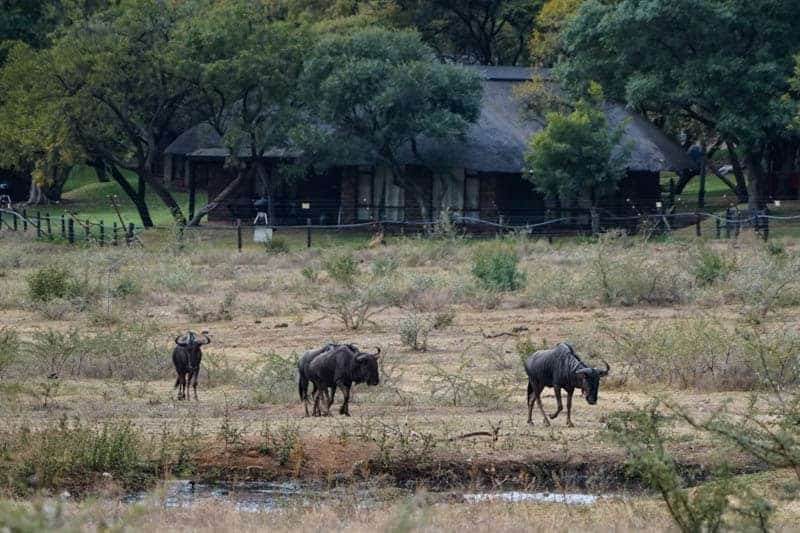 I did two of these, the first was a guided group drive, and today was a day for seeing elephants! From the start we saw so many elephants, and it was a first for me, seeing them in the flesh in their natural habitat. It was such a buzz to see one of the largest Bull’s in the park, followed by a few baby elephants crossing the road right in front of us. It wasn’t long before we had a slightly hairy encounter, which highlighted why the guides are so good at what they do. One of the elephants stood its ground with our vehicle, and squared up ready to charge, we quickly backed off as it walked towards us, as we retreated respecting her space. On this drive we also saw the White Rhinoceros, Mountain Zebras and a number of Impalas and Buffalo. It was a great start, and it left me eager to see more. 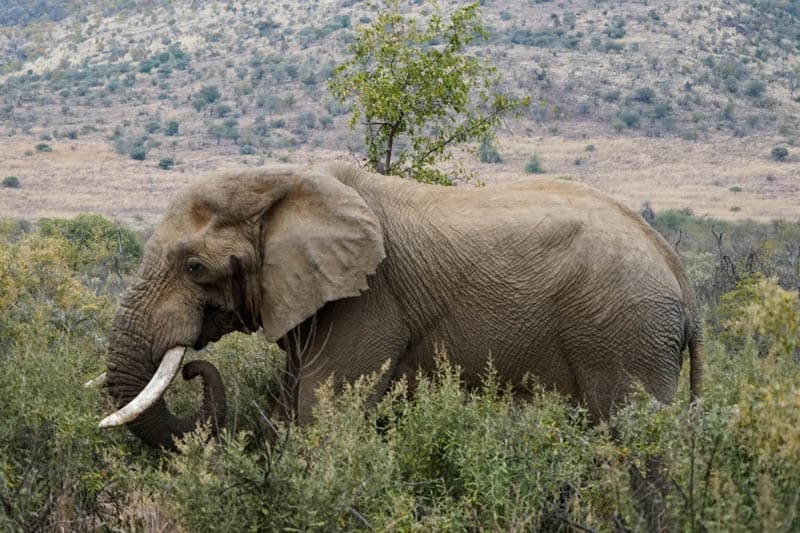 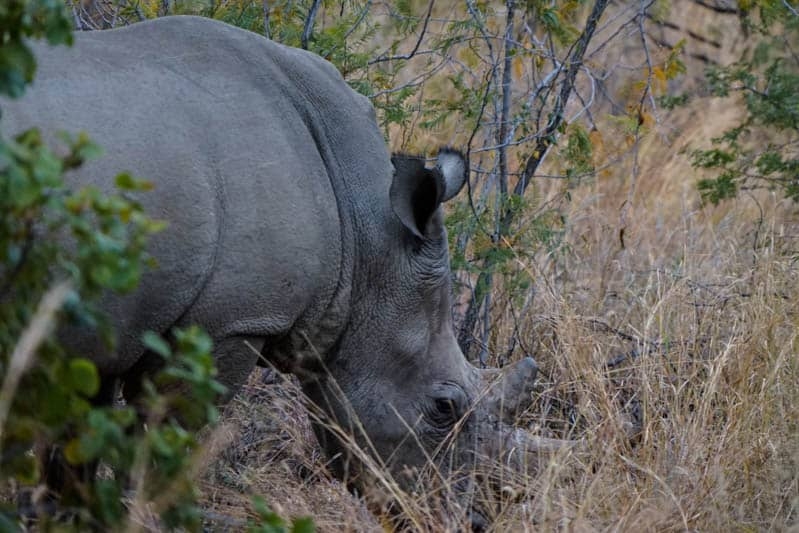 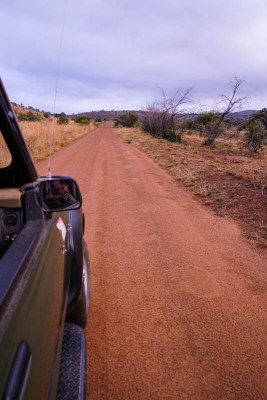 After a relaxed evening eating the great food at Bakubung, I was up at the crack of dawn for a Bush Walk. Yes a walk (WALK) out into the bush with a guide (carrying a gun) to see wildlife, up close and personal. To say I was a little apprehensive is an understatement, but I was up for it, we were doing this. Unfortunately, due to a storm in the night, and extremely high winds, it was deemed unsafe to do it. So I went on another game drive, but this time it was just me and one driver, my personal guide which meant we could really crack on and spot some wildlife, and did we just do that…

Right off the bat we saw a Hippo, from a distance but another first for me. That was swiftly followed by more White Rhino’s. Then out of nowhere we spotted a leopard, less than 20 feet from the truck! Now, to put this in perspective, not all of the guides have even seen leopards. It was incredible, and to see it swan off up a ridge, and see first hand how good its camouflage was, that was a real treat. I didn’t get as good photos as I did video, so check out the vlog. Our luck didn’t end there, that was followed by a herd of Zebra, then around 5-6 giraffe in the distance. We then chased down a pride of lions, they were so far away I couldn’t get a photo, but through the binoculars I could see them. It’s a shame we didn’t get a close up, but it still felt great. Finally we finished the drive by spotting a group of Springbok, South Africa’s national animal and nickname of the rugby team, I can’t think of a more fitting way to end the game drives. 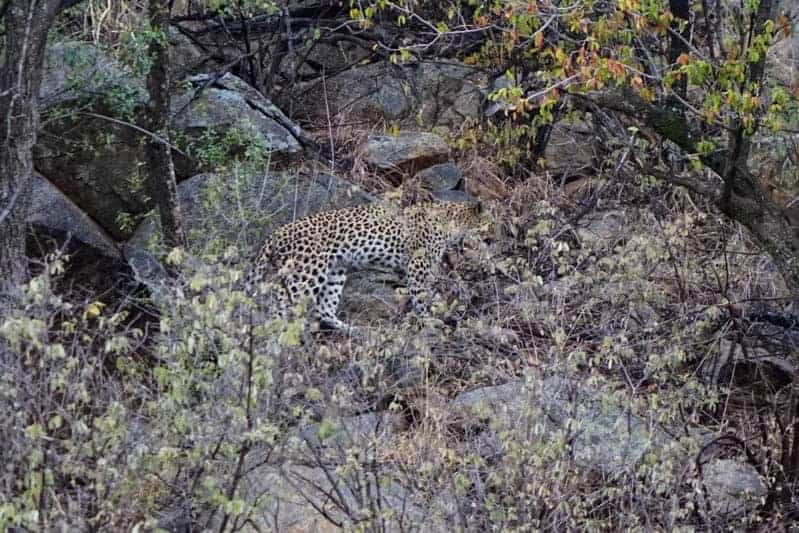 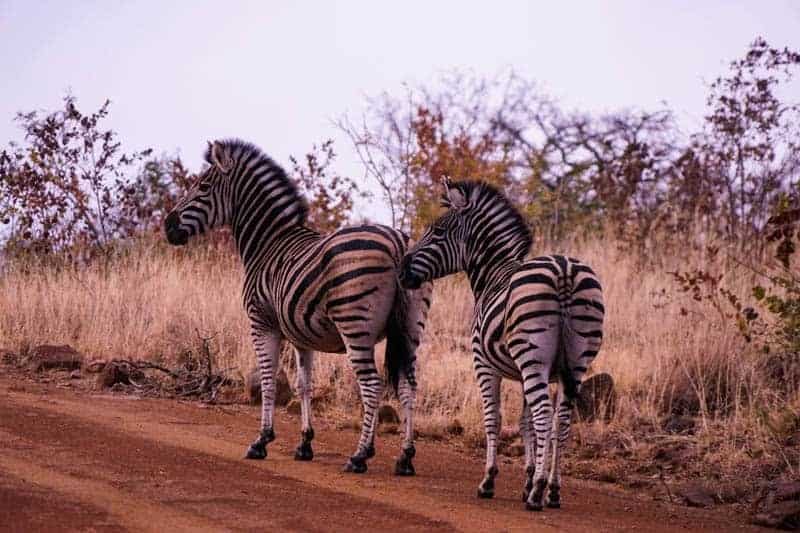 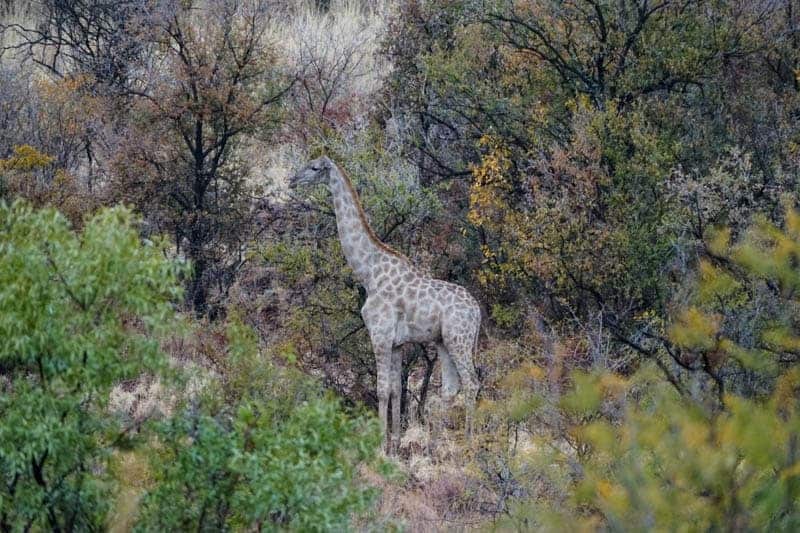 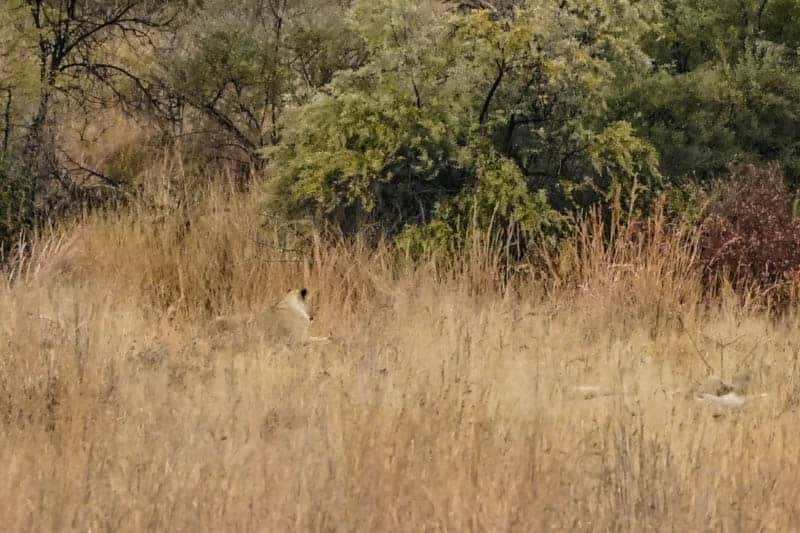 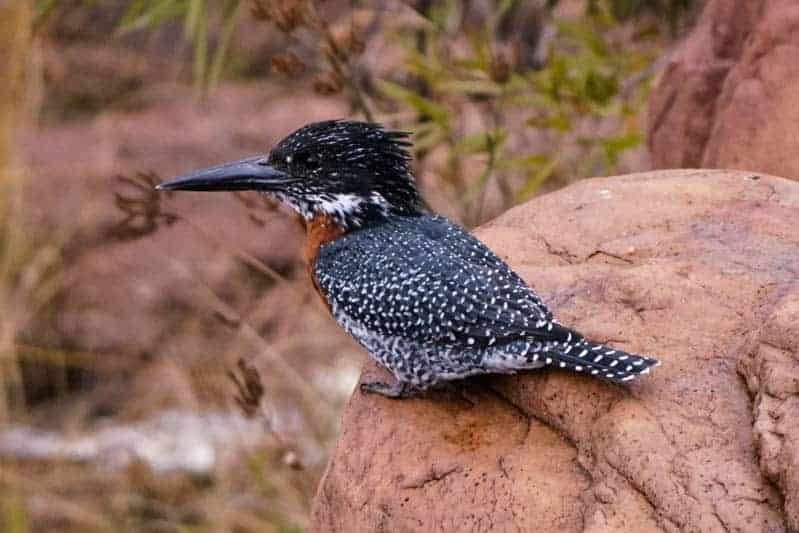 Bizarrely, on the second drive we didn’t see one elephant, which just goes to show wildlife spotting is a game of luck, and I was lucky. Technically covering the big 5 and some more, if you’re in Johannesburg then this is well worth the trip to Pilanesburg. 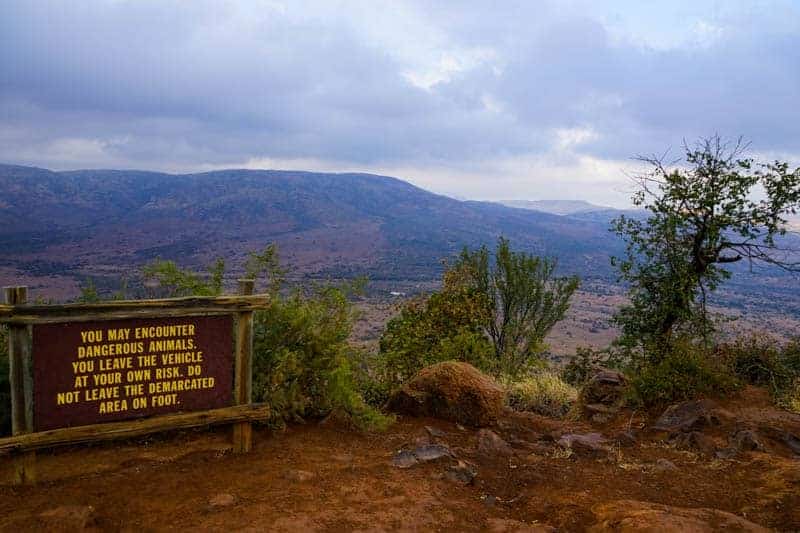 It’s within easy access to Jo’burg, and there is plenty to do in this great city. Check out my Vlog below, and have a read of the terrifying Orlando Towers Bungee! 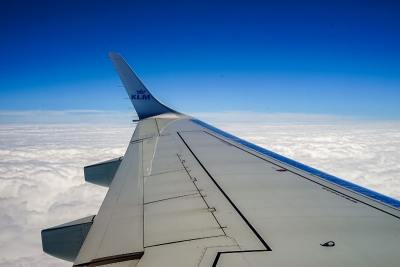 KLM UK flies to Johannesburg, South Africa using Amsterdam as a hub. They also fly to and from Cape Town, so you can go overland between the two cities. Going via Amsterdam allows you to fly from 17 UK based airports, rather than only travelling from Manchester or London. The changeover is smooth, KLM will inform you which gate (sometimes from the plane), and you won’t need to collect and check in your luggage again.

Support Intrepid Escape by adding this article using the photos below to Pinterest, Twitter or Facebook. For you to read later and share with your friends. Have you been to Pilanesburg National Park? What would be top of your wildlife list? I’d love to hear from you in the comments below. Thanks for reading and happy travels! 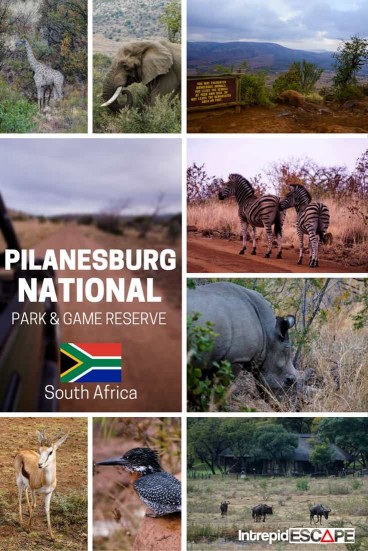 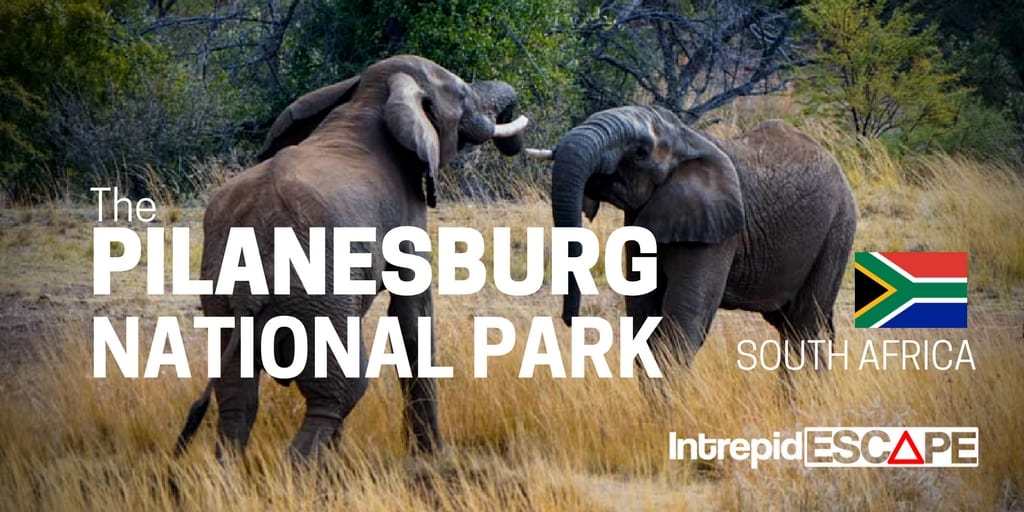